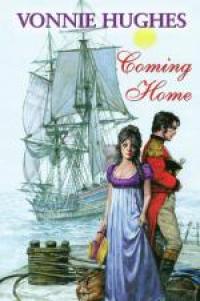 Long an Short Reviews
In the aftermath of a vicious rape, Juliana Colebrook shuns all men apart from the injured soldiers she nurses. Orphaned and alone, she desperately wants to leave Portugal for the protection of her relatives in England. However, there is still one man who invokes her admiration: Brigade-Major Colwyn Hetherington, with his self-deprecating sense of humour and innate sense of duty. So when Colwyn is offered a dream job managing a large estate in Wiltshire, Juliana asks him to escort her back to England. But Colwyn has troubles of his own and when he is forced to reveal the nature of his woes to a stunned Juliana, everything changes. Mired in danger, who can Juliana trust? And what of Colwyn's warning that families bring only trouble?

Coming Home by Vonnie Hughes is a wonderful, Regency era romance. Well-written, this book kept me turning pages until the end.

The first thing I noticed was how strong of a writer Ms. Hughes is. I was immediately drawn into the world of 1811, Portugal; convinced by the vibrant period details and language. I’ve read tales set in this era, and have to say the author did an excellent job. However, if you’re a reader who has never read anything set in the time of the English Regency, there will be expressions and words you’ll have to gloss over or look up. Luckily though, this won’t interfere with your enjoyment of the story.

I liked Brigade-Major Colwyn Hetherington, the battle-weary soldier, right away. I think I liked the heroine, Miss Juliana Colebrook, even more. She’s a hard-working nurse, laboring away to save the lives of the men hurt in the war. Both of these characters are realistic and all-too human; easy to relate too. My heart went out to them and their difficult situation.

Colwyn has the promise of a good job back in England, where he’s estranged from his family. His best friend’s father is a marquess, and Colwyn gets invited to be steward of their estates. Juliana is desperate to find her way out of her dreary life and head to England in search of relatives. She hopes to form a better life for herself. Her attempts to book passage on a ship fail. It’s interesting how she finally finds her way. The trip back to England is entertaining in itself, and some very sensuous things occur.

Once back in England, Colwyn and Juliana hate to part, having formed something of a friendship, and more. Juliana finds her relatives and is in for a shock. Colwyn hears of her situation and is deeply concerned. The events of the story unfold in a way where the tension is kept up. The reader is likely to be engaged throughout, I certainly was.

Through all the twists and turns of this story, Juliana and Colwyn remain admirable and I was happy to see their happy ending. I really enjoyed this book and would recommend it. It’s definitely an adventurous read.

This is a tightly plotted story set during the Peninsular War, with a heroine recovering from a vicious rape, and a hero who has been cut off by his family for something he did not do. Half-Portuguese and half-English, orphaned Juliana Colebrook is nursing in Portugal when she persuades ex-Brigade-Major Colly Hetherington to accompany her to England, where he has a job waiting for him. With high hopes she arrives at her uncle’s home, but all is not as it seems and, when things go wrong, she realises she is going to need Colly’s help in foiling the villains.
With believable characters, a well-drawn background, and events rising naturally out of the preceding action, this is a well-written novel.
The author’s photograph shows her in front of a collection of Georgette Heyer’s novels, and Heyer’s influence on her is evident in her writing. I can thoroughly recommend this novel to anyone who loves Regencies.

By Cathleen Ross, Reviewer/Author on Amazon.com

“This is a terrific read where the heroine is strong enough to face dangers, within the parameters of the Regency period, and win. The heroine has a troubled past due to a vicious rape and the hero has been accused of being a rapist. This is a strong conflict which kept me reading to the end so I could see how the hero cleared his name. Vonnie Hughes has a beautiful writing style well suited to this genre.

“I read this in a day. Just had to keep reading. You created such a great hero in Colly and made Juliana worthy of him. No simpering miss there! I enjoyed the read very much.”

“This book is extremely well written, and I loved the strong element of suspense in it. It was a treat to read and I was disappointed when I reached the end and had to let the characters go. I particularly enjoyed the fact that the emotional union did not come at the expense of good storytelling. Well done. You’ve done a great job!